Every year Google introduces new technology to smartphone users as Android. With the launch of Android 11 last year, the company introduced a number of new and exciting features that were well received by mobile users. At the same time, Google is going to bring great features again with Android 12. 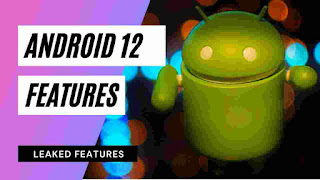 The developer preview of Android 12 i.e. Android 12 DP1 has been introduced by the company, which is available on certain phones. Of course, Android12 is going to take some time to reach your phone, but the features in this new operating system will surely thrill you. If you want to know everything about Android12 then this article is for you.

Let us know if this is the final preview version of Android 12 and the company will roll out the beta version directly after that. Before the features of this new OS, let us inform you that Android 12 can be brought to the market under the name Snow Cone. Notably, Google has always sweetened the name of its Android but it was not found in Android 11. However, this trend may come back with Android 12.

Google has sent out its new Android OS special for users interested in playing games on mobile phones. Android 12 will get an updated gaming mode. According to the information received, while playing the game in this gaming mode, users will be able to control SMS, calls, and messages, phone screen brightness, and sound control without interrupting the game. It can be said that the features that come with expensive gaming phones can now be seen on every Android smartphone.

For those who haven’t heard of AVMageFile, tell them that it is a new media file technology that saves image files in sharpness and high quality, but in contrast, the size is smaller than JPG so high-quality photos take up less space. On Android 12, this support is also available on phones. With the introduction of this feature, more photos can be saved on the phone without having to worry about the size of the phone.

Apple is often called the best in terms of data security and privacy. But now Android smartphones are also proving themselves better in this regard. Android 12 will also see a lot of new features on security and privacy. Google is bringing modes like the Permission dialog to protect mobile users’ data protection on Android 12, data transparency and privacy control, as well as new security layers in Android 12 for third-party applications.

Like photo files, it will be easier to access video files on Android 12. The new Android operating system will automatically transcode HVC and HDR10 and HDR10 + video in AVC format. Because of this format, videos recorded on the phone can be viewed and played on any software or application. I tell you that in the future, new technology will come in image and video file formats, which will provide better quality by taking up less space.

Now, the option of auto-rotation was given to change the angle of the phone screen, which had to be turned on or off. However, this angle of the phone display in Android 12 will only be rotated by the rotation of the face. According to the information received, many new things will be added to the phone rotation settings. The screen of the phone will be converted to horizontal or vertical mode according to the body posture of the user. This is a technology that will not match the second one attached to the front camera after the face unlocks feature.

Hope this article is very helpful for you.